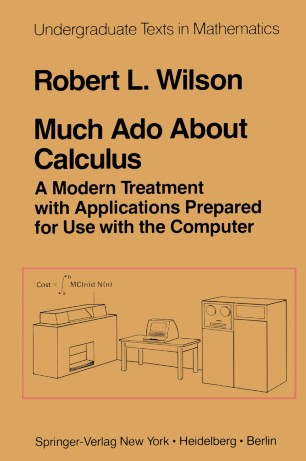 Much Ado About Calculus

A Modern Treatment with Applications Prepared for Use with the Computer

The calculus has been one ofthe areas of mathematics with a large number of significant applications since its formal development in the seventeenth century. With the recent development of the digital computer, the range of applications of mathematics, including the calculus, has increased greatly and now includes many disciplines that were formerly thought to be non­ quantitative. Some of the more traditional applications have been altered, by the presence of a computer, to an extent such that many problems hitherto felt to be intractable are now solvable. This book has been written as a reaction to events that have altered the applications of the calculus. The use of the computer is made possible at an early point, although the extent to which the computer is used in the course is subject to the decision of the instructor. Some less traditional applications are included in order to provide some insight into the breadth of problems that are now susceptible to mathematical solution. The Stieltjes integral is introduced to provide for easier transition from the stated problem to its mathematical formulation, and also to permit the use of functions like step functions in later courses (such as statistics) with relative ease. The course is designed to include all the background material ordinarily associa­ ted with the first course in the calculus, but it is also designed with the user in mind.