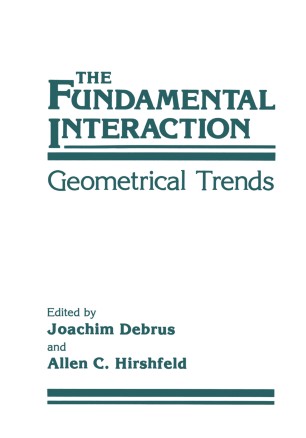 A meeting was held at the Physics Centre in Bad Honnef from Feb. 16-20, 1987 on the subject "The Fundamental Interaction: Geometrical Trends". This meeting was in the series of Physics Schools organized by the German Physical Society. The participants were mainly younger scientists and graduate students: physicists, mathematicians and astronomers from the Federal Republic of Germany; there were also participants from Austria, the Netherlands and Switzerland. The purpose of the meeting was to introduce the participants to modern methods of mathematics and field theory which are increasingly being used in current elementary particle research. An outstanding feature of the school was the fact that each lecturer really made an effort to present his material at an introductory level, which could be followed by people with the usual degree level qualifications and which, nevertheless, then led up to the level of contemporary specialized literature. We hope that the published volume will make these lectures, which taken together give a unified overview of the recent developments leading up to the current world-view in modern theoretical physics, available to a wider audience. We wish to thank the lecturers, who besides the formal lectures devoted their time to discussions with the participants throughout the duration of the School. We are also grateful to the staff of the Physics Centre for their organizational assistance, and to the participants, whose active interest made the meeting a success. The entire manuscript was efficiently typed by Manfred Krafczyk at the University of Dortmund.