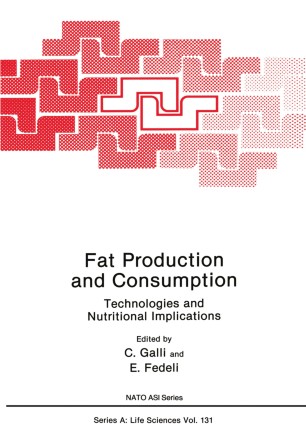 Among the major components of human diet, edible fats and oils are typically produced through various forms of technological manipulation of naturally available starting material. It is also generally recognized that dietary fat, namely the type and amount, playa significant role in modulating the health stat~s of large population groups in econ­ omically advanced countries, and that, more specifically, the onset and progression of a number of diseases of wide incidence and large socio-economical relevance, such as hyperlipidaemias, diabetes, hyper­ tension, are significantly affected by dietary fats. Associations operating in public health preventive programs and clinical associations in affluent countries have recommended changes of dietary habits and especially of fat consumption in the whole community. Among the parameters to be modified of special relevance are the re­ duction of total fat, of saturated fatty acids and cholesterol intake and to increase the amount of unsaturated fatty acids. It is, however, becoming more and more evident that each member of the complex fatty acid moiety of our diet may playa different role from a nutritional point of view. This is particularly true for the highly unsaturated compounds belonging to the two metabolic series n-6 and n-3, contained in high concentrations in vegetable oils and in lipids from marine animals respectively, as well as for oleic acid, contained in high concentrations in olive oil.