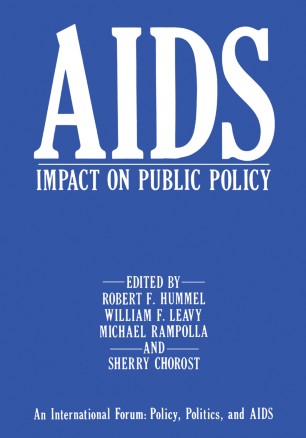 Acquired Immune Deficiency Syndrome continues to be a major concern of the research and health care communities as well as the dominant public health issue in the news media. In the early years of the epidemic. attention was appropriately focused on characterizing the epidemiology of the disease in order to define the nature and extent of this new threat. However. as the disease affected the lives of ever increasing thousands of individuals and spread to almost every country. its ramifications were felt at every level of society. In addition to medical and research issues. profound social. economic and moral dilemmas have arisen. The implications which AIDS has on public policy continue to unfold. Recognizing the value of assembling those who were involved with AIDS on a national and international level. New York State through its Health Department brought together social scientists, researchers. clinicians. educators, community leaders. government officials and public policy analysts to explore and discuss major AIDS public policy issues at the AIDS International Symposium. This volume includes both the major papers presented as well as the discussions among the panel members which followed the presentations. Clearly, the conference demonstrated the international nature of AIDS as a public health and public policy problem. Evident also ;s that the devleopment of public policy properly begins as a dialogue, both at the interpersonal and international levels, and that the process is never complete, particularly when it concerns the type of threat that AIDS presents to the world community.