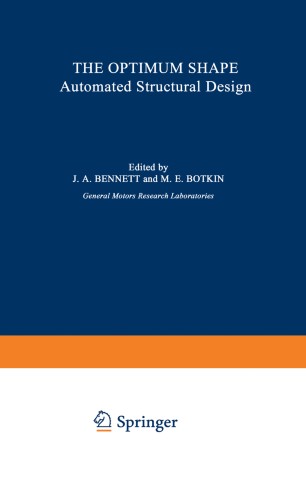 This book contains the papers presented at the International Symposium, "The Optimum Shape: Automated Structural Design," held at the General Motors Research Laboratories on September 3D-October 1, 1985. This was the 30th symposium in a series which the Research Laboratories began sponsoring in 1957. Each symposium has focused on a topic that is both under active study at the Research Laboratories and is also of interest to the larger technical community. While attempts to produce a structure which performs a certain task with the minimum amount of resources probably predates recorded civilization, the idea of coupling formal optimization techniques with computer-based structural analysis techniques was first proposed in the early 1960s. Although it was recognized at this time that the most fundamental description of the problem would be in terms of the shape or contours of the structure, much of the early work described the problem in terms of structural sizing parameters instead of geometrical descriptions. Within the past few years, several research groups have started to explore this more fundamental area of shape design. Initial research has raised many new questions about appropriate selection of design variables, methods of calculating derivatives, and generation of the underlying analysis problem.