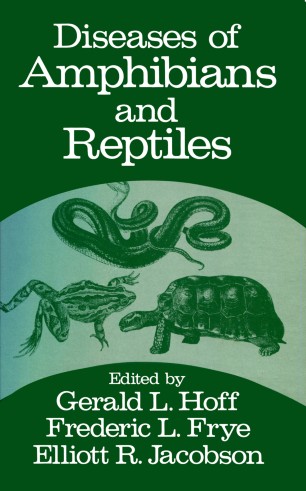 Diseases of Amphibians and Reptiles

While diseases of free-ranging and captive mammalian and avian wildlife species have received considerable interest in the past 25 years, those of amphibians and reptiles (collectively, the herptiles) generally have been assigned lesser importance. The literature concern­ ing disease in herptiles is widely scattered, consisting chiefly of case reports and prevalence surveys, and with heavy emphasis on captive reptiles. The dynamics of the host-agent-environment relationship have been studied for only a few diseases. This diverse data base is primarily a function of the paucity of investigators whose chief interest is in diseases of herptiles. This first edition represents an effort to bring together some of the diffuse knowledge on infectious and non-infectious diseases of free-ranging and captive herp­ tiles. Issue may be taken with the choice of topics; how­ ever, predominant diseases, as well as some diseases of lesser prominence, are presented. The editors were forced to accept certain omissions, particularly with amphibian diseases, simply for lack of contributors. The resulting text, however, we hope will be of value to veterinarians, herpetolo,gists, wildlife disease investigators, wildlife managers, zoo curators, and university students. G.L. Hoff F.L. Frye E.R. Jacobson v CONTENTS Mycobacteriosis 1 D.G. Brownstein Pasteurella in Reptiles 25 K.P. Snipes Pseudomonas 37 E.R. Jacobson Areomonas 49 E.B. Shotts, Jr.