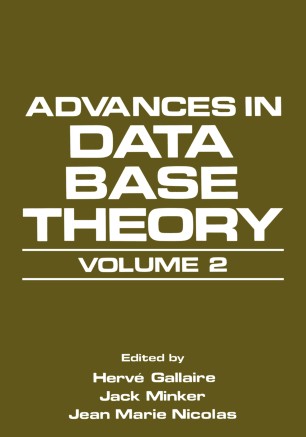 Advances in Data Base Theory

This is the third book devoted to theoretical issues in data­ bases that we have edited. Each book has been the outgrowth of papers held at a workshop in Toulouse, France. The first workshop, held in 1977 focused primarily on the important topic of logic and databases. The book, Logic and Databases was the result of this effort. The diverse uses of logic for databases such as its use as a theoretical basis for databases, for deduction and for integ­ rity constraints formulation and checking was described in the chapters of the book. The interest generated by the first workshop led to the deci­ sion to conduct other workshops focused on theoretical issues in databases. In addition to logic and databases the types of papers were expanded to include other important theoretical issues such as dependency theory which, although it sometimes uses logic as a basis, does not fit with our intended meaning of logic and databases explored at the first workshop. Because of the broader coverage, and because we anticipated further workshops, the second book was entitled, Advances in Database Theory - Volume 1. The book "Logic and Databases" should be considered Volume 0 of this series.