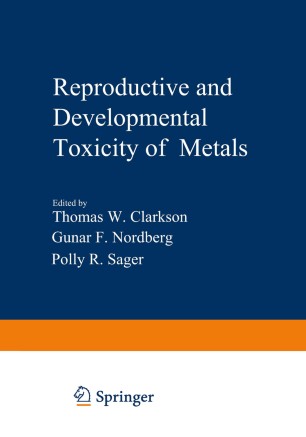 Reproductive and Developmental Toxicity of Metals

The Permanent Commission and International Association on Occupational Health (PCIAOH) established in 1969 a Subcommittee on the Toxicology of Metals under the chairmanship of Lars Friberg. This committee, which later was named the Scientific Committee on the Toxicology of Metals, has organized a number of previous meetings that have led to publications in three major areas of metal toxicology: a preliminary meeting in Slanchev Bryag, Bulgaria in- 1971, followed by a meeting in 1972 in Buenos Aires, Argentina which produced two reports (Dukes and Friberg, 1971; Task Group on Metal Accumulation, 1973), that discussed the metabolism of metals with special reference to absorption, excretion and biological half-times. The effects and dose-response relationships of toxic metals, including a discussion of general principles, was the second major topic addressed by the Scientific Committee at a meeting in Tokyo in 1974 (Nordberg, 1976). The philosophy of this conference, as well as the previous one in Buenos Aires, was based on the concept of a "threshold dose" for the occurrence of adverse effects. In a conference held in Atlanta, USA in 1980, the scope of discussion on metal effects was broadened to include the role of metals in carcinogenesis. Thus, for the first time, the Scientific Committee took under consideration the possibility of non-threshold relationships (Belman and Nordberg, 1981). In addition, the Scientific Committee on the Toxicology of Metals organized a workshop on metal interactions in Stockholm 1977 (Nordberg et al.