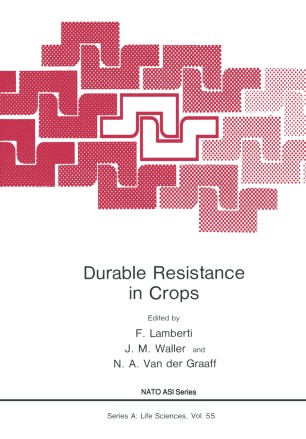 Plant diseases and pests are a major constraint to agricultural production despite the various measures used to control them. Chemical control, although often e~~ective, may pose environmental hazards and is relatively expensive, especially in developing countries where it may be completely uneconomic. Control through genetically mediated resistance to diseases and pests, is both cheap and environmentally sa~e and at present most diseases and pests o~ staple ~ood crops are controlled through some form of resistance. One of the basic problems in the use of resistance is its ~re­ quent lack of durability; very often a type of resistance is used that 'breaks down' after a certain period. The temporary nature of this resistance, due to the development of new strains of pest or pathogen able to overcome it, has seriously hindered the improvement o~ the yield potential of many crops as a continuing effort is needed to replace old cultivars who resistance has failed, with new ones. Following Vanderplank's now classical publications (1963, 1968) which differentiated horizontal and vertical resistance, studies on several host-parasite systems have shown that di~ferent types of resistance can be distinguished genetically and epidemiologically, and on the ability o~ the pests or pathogens to adapt to them. A knowledge of how resistance operates at the population level has also opened up possibilities of 'managing' relatively simple resistance types in such a way that a stable host-pathogen system can be pro­ duced with a minimum of crop loss.