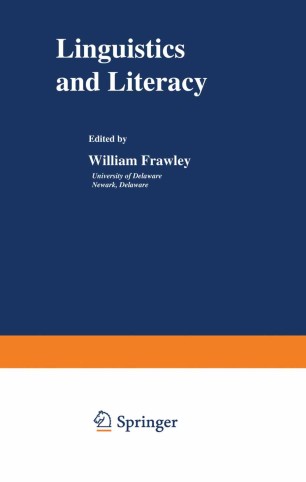 William Frawley University of Delaware Several years ago, I performed a kind of perverse experiment. I showed, to several linguistic colleagues, the following comment made by Walker Percy (in The Message in the Bottle): language is too important a problem to be left only to linguists. The linguists' responses were peculiarly predictable: "What does Percy know? He's a mercenary outsider, a novelist, a psychiatrist! How can he say something like that?" Now, it should be known that the linguists who said such things in response were ardent followers of the linguistic vogue: to cross disciplines at whim for the sake of explanation---any explanation. It was odd, to say the least: Percy was damned by the very people who agreed with him! Fortunately, the papers in this book, though radically interdisciplinary, do not fall prey to the kind of hypocrisy described above. The papers (from the Third Delaware Symposium on Language Studies) address the question of literacy---a linguistic problem too important to be left only to linguists--but many of the authors are not linguists at all, and those who are linguists have taken the care to see beyond the parochialism of a single discipline. The subsequent papers have been written by psychologists, linguists, anthropologists, computer scientists, and language teachers to explain the problem of how humans develop, comprehend, and produce extended pieces of informa­ tion (discourses and texts).