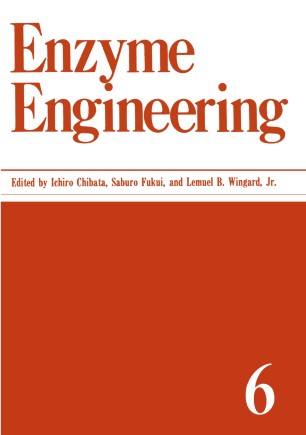 Presently, intensive and global attention is being devoted to "biotechnology"--the technology utilizing marvelous capacities of living things for human welfare. Each country is strongly promo­ ting its development. In particular, enzyme engineering, whose pur­ pose is to utilize efficiently enzymes, microorganisms, and cultured plant as well as animal cells as organic catalysts, is one of the main themes in the field of biotechnology. Under these circumstances, the Sixth Enzyme Engineering Confe­ rence was held at Kashikojima, Mie Prefecture, Japan from September 20 to 25, 1981, under the joint auspices of the Engineering Foun­ dation of New York and the Japanese Society of Enzyme Engineering. This series of international conferences has been held biannually since 1971. The first three and the fifth conferences were held in the United States and the fourth one was in the Federal Republic of Germany. This sixth conference was the first to be held in Asia; and it was significant that a number of participant£ could visit Japany, which has produced successful achievements in the field of biotechnology.