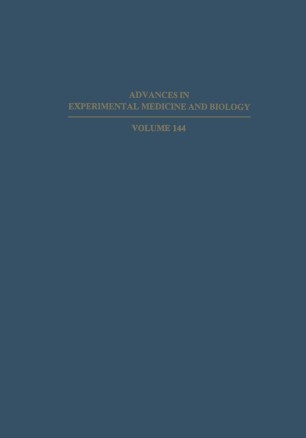 Part of the Advances in Experimental Medicine and Biology book series (AEMB, volume 144)

This second International Symposium on Mucus in Health and Disease once again brings together basic scientists such as Biochemists, Anatomists, Biologists and Clinicians who are dealing with aspects of mucus in the various tracts of the body where it is of such great functional importance. It is fitting that the meeting should take place at Manchester University where there is so much activity in this field and our grateful thanks are due to Or Eric Chantler for his untiring efforts in organising this meeting. At the first Mucus meeting, Sir Francis Avery Jones stated "this is a subject which will justify further Symposia, both local and international". As he predicted, this meeting succeeds the first and adds further to our progress in understanding the complex and unique structure and function of the mucus secretion in its various sites of the body. Much was learned from the first meeting and it is hoped that the second will be an appropriate successor to it. The emphasis in this meeting has been to encourage discussion and the presentation of research material. In this respect, review articles have been kept to a minimum. The structure of the Conference has been organised around eight keynote addresses: one on the biosyn­ thesis of the general mucus glycoproteins and another on its physical properties. Other keynote papers are on the biochemical and clinical aspects of mucus in the respiratory, gastrointestinal and urogenital tracts by recognised authorities in these subjects.