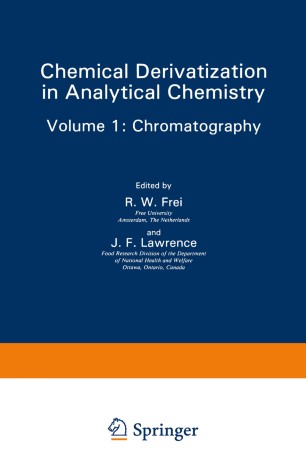 The first volume in this series is devoted to derivatization techniques in chromatography, for very obvious reasons. In gas chromatography (GC) chemical derivatization as an aid to expand the usefulness of the technique has been known for more than a decade and has become an established approach. The first chapter deals to a great extent with derivatization for the purpose of making compounds amenable to Gc. Although the discussion concentrates on pesticides, some generally valid conclusions can be drawn from this chapter. Chemistry will not be limited to the separation-it can also have a pronounced impact on the sample cleanup, another topic cov­ ered in Chapter 1. Since the introduction of coupled GC-mass spectroscopy (GC-MS), a very powerful tool, derivatization techniques have taken still another di­ rection-taking into consideration chromatographic as well as mass spec­ trometric improvement of the compounds of interest. Cyclic boronates are discussed as derivatization reagents for this purpose in the second chapter.