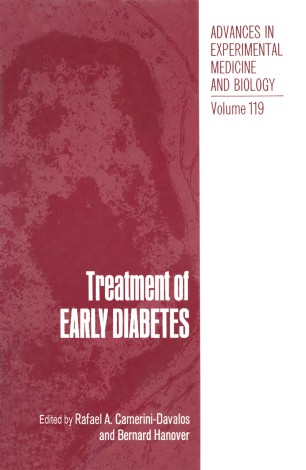 Part of the Advances in Experimental Medicine and Biology book series (AEMB, volume 119)

To obey the precepts of therapeutic rationality, we should avoid treating the "effect" when there is a way to attack the cause. But what is the cause of diabetes? Diabetes is a molecular disease, that is, a disease in which important cellular components are seriously impaired. Eventually, the activities or the products arising from the impairment find expression in various ways, finally culminating in the abnormalities of diabetes. How early is early enough to attempt to delay this sequence of events? What will provide us with the basis to explore ways and means of halting the progression of the pathological process? What are the new approaches for the treatment of early diabetes? The Fourth International Symposium on Early Diabetes, sponsored by the Diabetes Center of the New York Medical College, held in Algarve, Portugal in November 1978, from which this book evolved, attempted to answer some of these questions. A list of the participants, including their affiliations, will be found preceding the index. Rafael A. Camerini-Davalos v Acknowledgments To our sponsors, U.S.V. Pharmaceutical Corp., Pfizer Pharmaceuticals, Ames Company, Hoechst, Frankfurt; supporters, Boehringer, Manheim, Laboratoires Servier, Nordisk Laboratory, The Upjohn Company, Eli Lilly and Company, F. Hoffman La Roche; and contributors, Bayer A. G. Leverkusen, McNeil, Novo Research Institute, ICI Belgium, Hope for Diabetics Foundation, New York, we express our appreciation for the financial support which made possible the Fourth International Symposium on Early Diabetes. THE ORGANIZING COMMITTEE Rafael A. Camerini-Davalos, M.D.