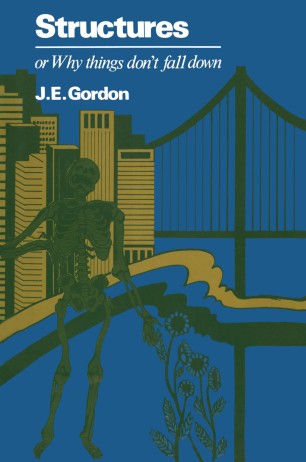 Structuresor Why things don’t fall down

I am very much aware that it is an act of extreme rashness to attempt to write an elementary book about structures. Indeed it is only when the subject is stripped of its mathematics that one begins to realize how difficult it is to pin down and describe those structural concepts which are often called' elementary'; by which I suppose we mean 'basic' or 'fundamental'. Some of the omis sions and oversimplifications are intentional but no doubt some of them are due to my own brute ignorance and lack of under­ standing of the subject. Although this volume is more or less a sequel to The New Science of Strong Materials it can be read as an entirely separate book in its own right. For this reason a certain amount of repetition has been unavoidable in the earlier chapters.
I have to thank a great many people for factual information, suggestions and for stimulating and sometimes heated discussions. Among the living, my colleagues at Reading University have been generous with help, notably Professor W. D. Biggs (Professor of Building Technology), Dr Richard Chaplin, Dr Giorgio Jeronimidis, Dr Julian Vincent and Dr Henry Blyth; Professor Anthony Flew, Professor of Philosophy, made useful suggestions about the last chapter. I am also grateful to Mr John Bartlett, Consultant Neurosurgeon at the Brook Hospital. Professor T. P. Hughes of the University of the West Indies has been helpful about rockets and many other things besides. My secretary, Mrs Jean Collins, was a great help in times of trouble. Mrs Nethercot of Vogue was kind to me about dressmaking. Mr Gerald Leach and also many of the editorial staff of Penguins have exercised their accustomed patience and helpfulness. Among the dead, l owe a great deal to Dr Mark Pryor - lately of Trinity College, Cambridge - especially for discussions about biomechanics which extended over a period of nearly thirty years. Lastly, for reasons which must surely be obvious, l owe a humble oblation to Herodotus, once a citizen of Halicamassus.