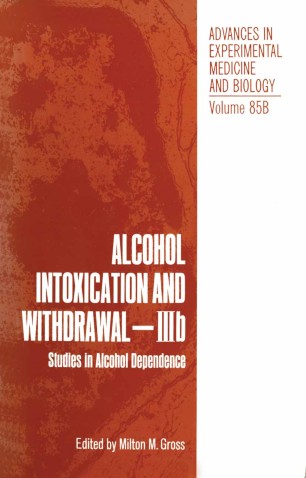 Part of the Advances in Experimental Medicine and Biology book series (AEMB, volume 85B)

Dr. Milton M. Gross, the editor of these volumes, died on July 29, 1976, after a brief illness. As chairman of the section on Biomedical Research in Alcoholism of the I.C.A.A., he had plan­ ned and brought to fruition the international "Symposium on Alcohol Intoxication and Withdrawal" which had taken place in Lausanne the month before. He was particularly proud of the distinguished group of scientists he had helped to assemble and was eagerly looking for­ ward to the publication of these proceedings which he hoped would extend our understanding of the phenomenology of alcoholism. Milton Gross was a most unusual man in the extent and range of his activities and accomplishments. He was a certified psy­ chiatrist and psychoanalyst, a recognized clinical researcher, the author of more than fifty scientific papers, and the editor of three important volumes on alcohol intoxication and withdrawal. He was extremely active in the scientific world of alcoholism as planner and coordinator of three international conferences, as chairman of the section on Biomedical Research of the I.C.A.A., and as a member of a W.H.O. Task Force on Alcoholism. In addition, he was very active in a variety of scientific and service committees in national and local organizations.