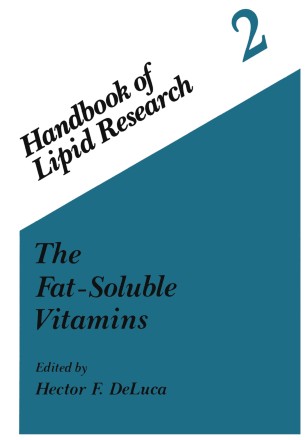 The first demonstration of the existence of a vitamin and the full recognition of this fact are often attributed to the work of McCollum, who found that a sub­ stance in butterfat and cod-liver oil was necessary for growth and health of ani­ mals fed purified diets. It became obvious that an organic substance present in microconcentrations was vital to growth and reproduction of animals. Following the coining of the word vitamine by Funk, McCollum named this fat-soluble sub­ stance vitamin A. We can, therefore, state that vitamin A was certainly one of the first known vitamins, yet its function and the function of the other fat-soluble vitamins had remained largely unknown until recent years. However, there has been an explosion of investigation and new information in this field, which had remained quiescent for at least two or three decades. It is now obvious that the fat-soluble vitamins function quite differently from their water-soluble counter­ parts. We have learned that vitamin D functions by virtue of its being converted in the kidney to a hormone that functions to regulate calcium and phosphorus metabolism. This new endocrine system is in the process of being elucidated in detail, and in addition, the medical use of these hormonal forms of vitamin D in the treatment of a variety of metabolic bone diseases has excited the medical com­ munity.