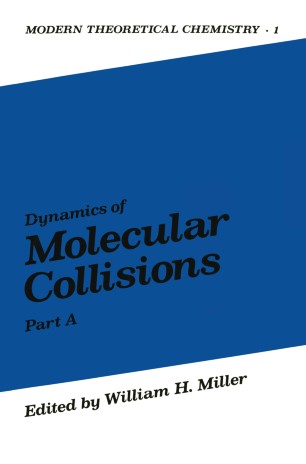 Activity in any theoretical area is usually stimulated by new experimental techniques and the resulting opportunity of measuring phenomena that were previously inaccessible. Such has been the case in the area under consideration here beginning about fifteen years ago when the possibility of studying chemical reactions in crossed molecular beams captured the imagination of physical chemists, for one could imagine investigating chemical kinetics at the same level of molecular detail that had previously been possible only in spectroscopic investigations of molecular stucture. This created an interest among chemists in scattering theory, the molecular level description of a bimolecular collision process. Many other new and also powerful experimental techniques have evolved to supplement the molecular beam method, and the resulting wealth of new information about chemical dynamics has generated the present intense activity in molecular collision theory. During the early years when chemists were first becoming acquainted with scattering theory, it was mainly a matter of reading the physics literature because scattering experiments have long been the staple of that field. It was natural to apply the approximations and models that had been developed for nuclear and elementary particle physics, and although some of them were useful in describing molecular collision phenomena, many were not. The most relevant treatise then available to students was Mott and Massey's classic The Theory of Atomic Collisions, * but, as the title implies, it dealt only sparingly with the special features that arise when at least one of the collision partners is a molecule.