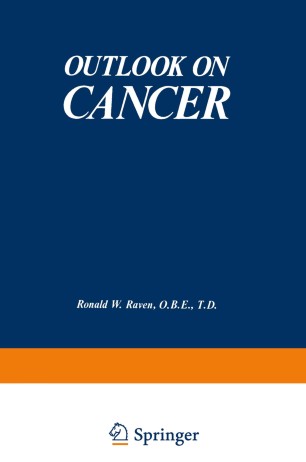 When the 1975 and 1976 symposia of The Marie Curie Memorial Foundation took place at the Royal College of Surgeons of England it was IDY great privilege to say a few words at the opening of each of them. It is equally a privilege to contribute these few introductory words to the Volume recording these symposia and I believe that it would not be inappropriate to recall with minor mod­ ifications some of the thoughts that occurred to me when I opened the symposium in 1976, for they do reflect the spirit of determined optimism, but without complacency, that characterized the contributions on both of these two occasions. In common with many others I always looked forward, from year to year, to the Meetings and admired each time the spirit which was so apparent and so very much in tune with the general philosophy of a surgeon, the spirit which admits that to a doctor and all others who care for patients cancer is a grim and terrible foe but suggests that, rather than sitting down and grizzling about it, we should bestir ourselves, do our best, whatever the difficulties, and at least try to do a little better each year. The title of the symposium in 1976 was typically stimulating,-"Towards a Solution",- not, admittedly a study of the solution itself but a title emphasising that the position was not static - that it was mobile, that we ~ moving forward and we do know where we are going.