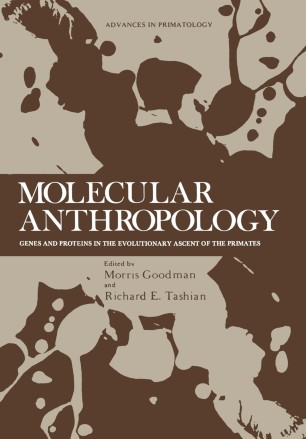 Genes and Proteins in the Evolutionary Ascent of the Primates

Part of the Advances in Primatology book series (AIPR)

In 1962 at the Burg Wartenstein Symposium on "Classification and Human Evolution," Emile Zuckerkandl used the term "molecular anthropology" to characterize the study of primate phylogeny and human evolution through the genetic information contained in proteins and polynucleotides. Since that time, our knowledge of molecular evolution in primates and other organisms has grown considerably. The present volume examines this knowledge especially as it relates to the phyletic position of Homo sapiens in the order Primates and to the trends which shaped the direction of human evolution. Participants from the disciplines of protein and nucleotide chemistry, genetics, statistics, paleon­ tology, and physical anthropology held cross-disciplinary discussions and argued some of the major issues of molecular anthropology and the data upon which these arguments rest. Chief among these were the molecular clock controversy in hominoid evolution; the molecular evidence on phylogenetic relationships among primates; the evolution of gene expression regulation in primates; the relationship of fossil and molecular data in the Anthropoidea and other pri­ mates; the interpretation of the adaptive significance of evolutionary changes; and, finally, the impact on mankind of studies in molecular anthropology. Most of the papers in this volume were presented in a preliminary form at Symposium No. 65 on "Progress in Molecular Anthropology" held at Burg Wartenstein, Austria, from July 25 to August 1, 1975. These papers were subsequently revised and some additional papers related to the theme of the symposium were also contributed to this volume.