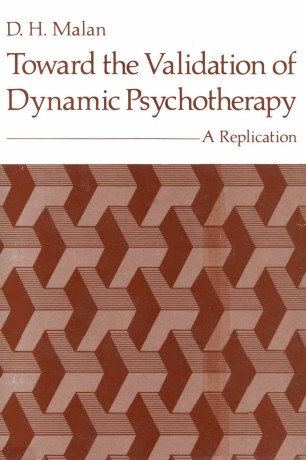 Toward the Validation of Dynamic Psychotherapy

The final judgment depends on how much emphasis is given to the residual difficulties. SCORES Team 1 3.5 2.5 Team 2 2.5 2.5 Mean 2.75 THE o,INICAL MATERIAL I THE COMPANY SECRETARY 59 The Company Secretary SUMMARY Category. Short, unfavorable (12 sessions, outcome 1.0). A married man of forty-three complaining of indigestion and partial impotence. Final follow-up suggests that he was wrongly assessed initially and many factors in the situation between him and his wife were not elicited. The initial focus seems to have been wrongly selected, and the main response to interpretation came far later on an unexpected theme. CONTRIBUTION TO THE CORRELATIONS WITH OUTCOME Motivation: Positive (intermediate motivation, poor outcome). Focality: Major disagreement between the judges. Transference iparent interpretations: Strongly positive (low score, poor outcome). DETAILS OF PATIENT AND THERAPIST 1. Patient Sex M. Age 43. Marital status Married. Occupation Company secretary in the head office of a chain of radio and electrical shops. Complaints (1) Indigestion, (2) partial impotence, for six years. What seems to bring His wife is now pressing him to seek treatment patient now for his sexual problem. 2. Therapist Code G. Sex M. PSYCHIATRIC HISTORY His first attack of gastric trouble occurred about six years ago and lasted for a few months. It consisted of attacks of left epigastric pain.