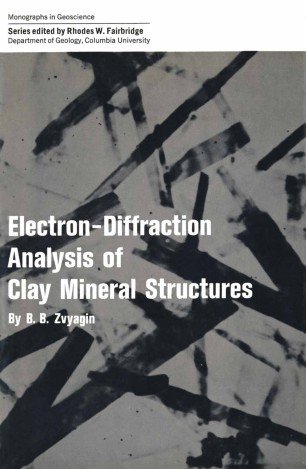 As a method of structure analysis, electron diffraction has its own spe­ cial possibilities and advantages in comparison to the X -ray method for the study of finely dispersed minerals with layer or pseudolayer structures. How­ ever, possibly because of the prior existence of the X-ray method, which found universal application in different fields and attracted the main efforts of spe­ cialists, electron diffraction has been unevenly disseminated and developed in different countries. In particular, the oblique texture method, which gives very complete and detailed structural information, has been mainly used in the Soviet Union, where electron-diffraction cameras specially suited to the method have been constructed. In other countries, studies have been made of micro-single crystals, because these studies could be carried out with existing electron microscopes. It should be recognized that the scale of distribution and use attained by electron-diffraction methods, at present limited by exist­ ing experimental conditions. is more than justified by the value of the results which may be obtained by their aid. The author hopes that the present book will give the reader a fuller idea of the valuable advantages of the method, and of the structural crystallography picture which has been built up for clay minerals, and layer silicates in general, from electron-diffraction data. The time between the appearance of this book and that of the Russian edition has been comparatively short.