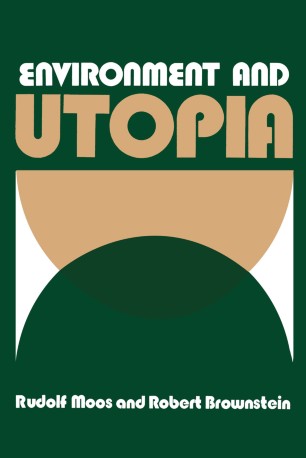 to imagine and innovate with our ability to comprehend and manipulate natural and social forces. We must produce constructive contact between our visions of hope and our scientific knowledge of the physical and social environment. This work is an effort to further that contact. We seek to focus upon the future relationship between man and his environment. Specifically, we attempt to synthesize two distinct approaches to this issue: environmental theory and utopian speculation. These two perspectives have rarely, if ever, been deliberately focused upon one an­ other. We believe that each suggests new questions and hopefully new an­ swers that would not normally be revealed through the separate insights of the other discipline. Both perspectives have existed in one form or another for centuries. Yet today, there is an increased urgency for their mutual development and interaction. This century, to its loss, has tended to abandon utopian specu­ lation. We witness "a retreat from constructive thinking about the future in order to dig oneself into the trenches of the present. It is a ruthless elim­ ination of future-centered idealism by today-centered realism. We have lost the ability to see any further than the end of our collective nose. " 2 At the same time, contemporary research on the environment suggests an urgent need for change in basic patterns of human behavior, for the for­ mation of new institutions and social structure.