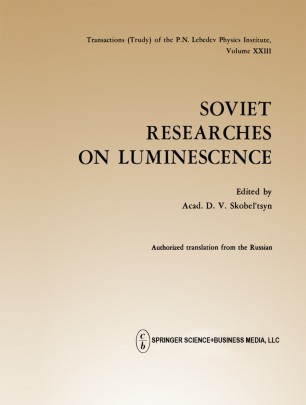 It is well known that luminescence is the term used to describe the excess radiation from a body over and above the thermal radiation and persisting for a time which greatly exceeds the period of a light vibration. The first half of this definition, proposed by Wiedemann, distinguishes luminescence from equilibrium thermal radi­ ation; the second half, introduced by Vavilov, distinguishes luminescence from various forms of scattering and from induced radiation, such as Vavilov-Cherenkov radiation, etc. Distinctions are made between photo-, cathodo-, x-ray-, and other forms ofluminescence, depending on how energy is introduced into the luminescent body. Electroluminescence is the name given to that form of fluorescence in which the radiating body receives energy directly from an electric field. It should be noted that luminescence under the influence of cathode rays is not called electroluminescence, because in this case the necessary energy is not supplied directly from the electric field to the radiating body but by means of extraneous electrons. Electroluminescence of gaseous bodies (radiation from a gas discharge) has been known for a long time and is widely used in luminescent lamps and gas discharge tubes. In 1923 Losev [1J observed radiation from silicon carbide crystals when a voltage was applied to them di­ rectly.