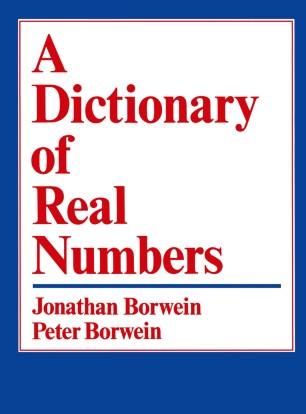 A Dictionary of Real Numbers

How do we recognize that the number . 93371663 . . . is actually 2 IoglQ(e + 7r)/2 ? Gauss observed that the number 1. 85407467 . . . is (essentially) a rational value of an elliptic integral-an observation that was critical in the development of nineteenth century analysis. How do we decide that such a number is actually a special value of a familiar function without the tools Gauss had at his disposal, which were, presumably, phenomenal insight and a prodigious memory? Part of the answer, we hope, lies in this volume. This book is structured like a reverse telephone book, or more accurately, like a reverse handbook of special function values. It is a list of just over 100,000 eight-digit real numbers in the interval [0,1) that arise as the first eight digits of special values of familiar functions. It is designed for people, like ourselves, who encounter various numbers computationally and want to know if these numbers have some simple form. This is not a particularly well-defined endeavor-every eight-digit number is rational and this is not interesting. However, the chances of an eight digit number agreeing with a small rational, say with numerator and denominator less than twenty-five, is small. Thus the list is comprised primarily of special function evaluations at various algebraic and simple transcendental values. The exact numbers included are described below. Each entry consists of the first eight digits after the decimal point of the number in question.