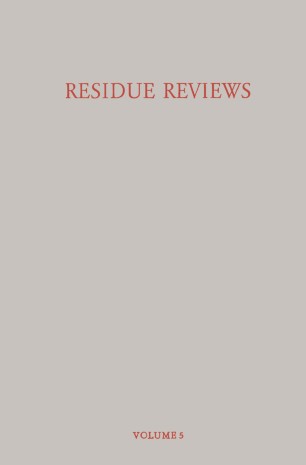 The object of "Residue Reviews" is to provide concise, critical reviews of timely advances, philosophy, and significant areas of accomplished or needed endeavor in the total field of residues of pesticide and certain other chemicals in foods, feeds, and in transformed food products. During the 144th National Meetings of the American Chemical Society in Los Angeles, California the Pesticides Subdivision of the A. C. S. Division of Agricultural and Food Chemistry on April 1, 1963 sponsored a symposium "Instrumen­ tation for the Detection and Determination of Pesticides and Their Residues in Foods". With special permission from R. N. HADER and his associates in the American Chemical Society, that symposium is reproduced in this volume of "Residue Reviews" because of its timeliness and significance to pesticide residue analysts everywhere. Without exception the symposium authors accepted my invitation to utilize "Residue Reviews" as their publication medium, and their coopera­ tion in the extra chore of providing manuscripts conforming to the style requirements of "Residue Reviews" is gratefully acknowledged. Presiding over the two sessions of the symposium were CHARLES L. DUNN and MILTON S. SCHECHTER, whose introductory remarks at that time comprise the foreword to this volume; their enthusiastic assistance both in organizing the symposium and in achieving this final product is warmly appreciated. F. A. G.