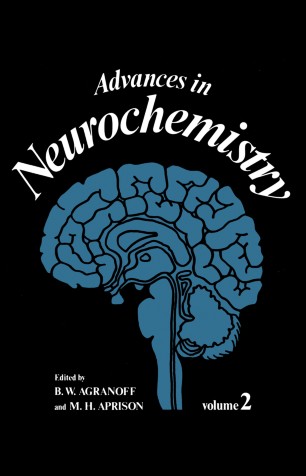 Part of the Advances in Neurochemistry book series (volume 2)

In the Preface to Volume 1, we stated: This series recognizes that investigators who have entered neurochemistry from the biochemical tradition have a rather specialized view of the brain. Too often, interdisci­ plinary offerings are initially attractive but turn out to recite basic biochemical considera­ tions. We have come to believe that there are now sufficiently large numbers of neurochemists to support a specialized venture such as the present one. We have begun with consideration of traditional areas of neurochemistry which show considerable scientific activity. We hope they will serve the neurochemist both for general reading and for specialized information. The reader will also have the opportunity to reflect on the unbridled speculation that results from the disinhibiting effects on the author who has been invited to write a chapter. We plan occasionally also to offer reviews of areas not completely in the domain of neurochemistry which we nevertheless feel to be sufficiently timely to be called to the attention of all who use chemical principles and tools in an effort to better understand the brain. The contributions to the present volume pursue these goals. We believe the series has set high standards and has continued to uphold them. In accordance with the principle stated in the last paragraph of the Preface Volume 1, we include in this volume Koshland's "Sensory Response in Bacteria" (Chapter 5).