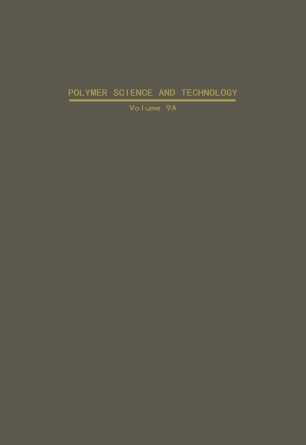 The first ACS Adhesion Symposium was held in Washington, D.C., September 1971. During the four years since that meeting, much interest in adhesion has been generated among six divisions of the American Chemical Society. Then, in 1974, the Macromolecular Secretariat appointed me to work closely with the six Session chairmen in organizing this Symposium on Science and Technology of Adhesion. Needless to say, the success of the Symposium which took place between April 7 and 10, 1975 in Philadelphia, Pa., is due to their excellent cooperation and the enthusiastic response of con­ tributors. As originally planned, each division was responsible for one session, and most of the papers, including several late con­ tributions, are published in these two volumes of proceedings. During the Symposium, we held a banquet in honor of Professor Herman Mark in celebration of his eightieth birthday. His Plenary Lecture and the Symposium Address by Professor Murray Goodman are published in full at the beginning of the first volume. I thank Professors Mark and Goodman for their excellent presentations on this memorable occasion.