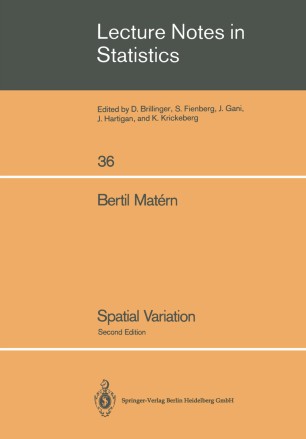 This book was first published in 1960 as No. 5 of Volume 49 of Reports of the Forest Research Institute of Sweden. It was at the same time a doctor's thesis in mathematical statistics at Stockholm University. In the second edition, a number of misprints and other errors have been corrected. An author index and a subject index have been added. Finally, a new postscript comments on the later development of the subjects treated in the book. BERTIL MATERN March r¢6 Acknowledgements The completion of this thesis was facilitated through the generous assist­ ance of several persons and institutions. I would wish to express my sincere gratitude to my teacher, Professor HARALD CRAMtR, now chancellor of the Swedish universities, for his valuable help and encouragement. Sincere thanks are also offered to Professor ULF GRENANDER for kindly reading the first version of the manuscript and giving valuable advice. The thesis has been prepared during two widely separated periods. A preliminary draft of Ch. 2 was written in 1948, whereas the remaining parts were completed in 1959-1960. The work originates from problems which I discussed in a publication in 1947. The problems were assigned to me by Professor MANFRED NASLUND, former head of the Swedish Forest Research Institute, now governor of the province Norrbotten. It is a pleasure to acknowledge my gratefulness to Professor Naslund for his un­ remitting encouragement and interest in my work.