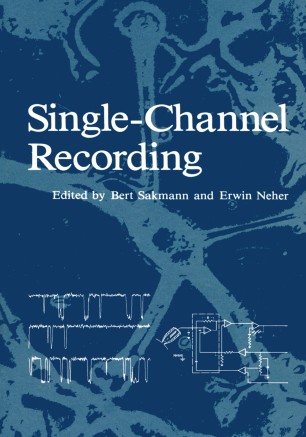 Single-channel recording has become a widely used tool for the study of ion permeation mechanisms in biological membranes. Whereas the technique might have been considered an "art" after its introduction in 1976, it developed into a relatively simple method after it became possible to obtain high-resistance (several gigaohm) membrane-pipette seals. In the summer of 1982, a course on the technique was held at the Ettore Majorana Center for Scientific Culture in Erice, Sicily. It brought together people from most of the laboratories involved in patch clamping at that time. During the course, it became apparent that the technique had reached a state of maturity. Repeatedly, the opinion was expressed that a detailed description of all the aspects of the technique including representative examples of results should be available. We therefore asked the course instructors, as well as several other colleagues, to provide chapters on selected topics in order to produce this volume. The different variants of patch clamping were described quite extensively in an article by Hamill, Marty, Neher, Sakmann, and Sigworth (Pflugers Archiv 391:85) in 1981. Rather than repeating this survey in an introductory chapter, we chose to reprint that article in the Appendix of this volume (by permission of Springer-Verlag). The methods section will, therefore, go straight into detailed aspects of the technol­ ogy.