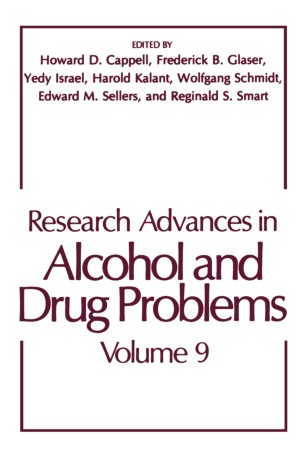 This, the ninth volume in the series, appears some 13 years after the first. Like most of its predecessors, Volume 9 is deliberately eclectic, covering a range of topics that the editors think worthy of inclusion. Some of the chapters, such as the review of the literature on benzodiazepines, represent areas that have received relatively little attention in previous volumes-largely because the literature has not previously been "ripe" for review. Others represent literatures that have been reviewed in the past but which continue to advance in sufficient measure that their ripening never ceases. Shepard Siegel's contribution represents a relative rarity in previous volumes: a chapter not laden with a consideration of current empirical work, but a reflective essay designed to stir thought with some pro­ vocative ideas. The editors trust that readers will continue to find Research Advances to be an important repository of knowledge in the alcohol and drug fields. The Editors Toronto IX Contents 1. THE HUMAN PHARMACOLOGY OF NICOTINE Neal L. Benowitz 1. Introduction 2. Nicotine in Tobacco Products 2 3. Phannacokinetics of Nicotine 4 4. Nicotine and Cotinine Blood Levels during Tobacco Use 14 5. Intake of Nicotine during Cigarette Smoking 18 6. Biochemical Markers of Nicotine Intake 18 7. Regulation of Nicotine Intake during Cigarette Smoking 23 8. Phannacology of Nicotine 28 9. Importance of Nicotine in Human Disease 41 References 45 2. BENZODIAZEPINES AS DRUGS OF ABUSE AND DEPENDENCE 53 Howard D. Cappell, Edward M. Sellers, and Usoa Busto 1.