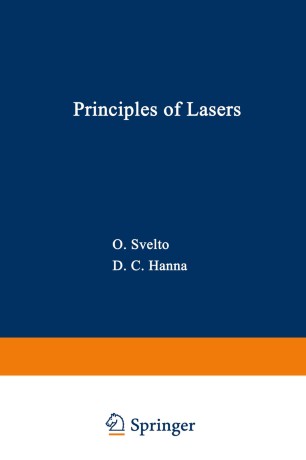 This second edition, appearing about twenty years after the discovery of the laser is a substantially revised version of the first edition. It is, like the first, aimed at both classroom teaching and self-study by technical personnel interested in learning the principles of laser operation. In preparing the second edition the hope has been that both these aims will be better served as a result of the various improvements made. The main changes have been made with the following aims in mind: (i) To update the book. Thus new topics have been added (in particular on various new types of lasers, e. g. , rare-gas-halide excimer lasers, color-center lasers, and free-electron lasers), while on the other hand some topics have been given less emphasis (again this applies particularly to some types of lasers, e. g. , the ruby laser). Updating is especially important in the area of laser applications, and the chapter on this topic has therefore been com­ pletely rewritten. (ii) To make some improvements to the logical consis­ tency of the book by rearranging material and adding new material. Thus a few topics have been moved from one section to another and a new chapter entitled Laser Beam Transformation has been added. (iii) To further reduce the mathematical content, placing greater emphasis on physical descrip­ tions of phenomena.