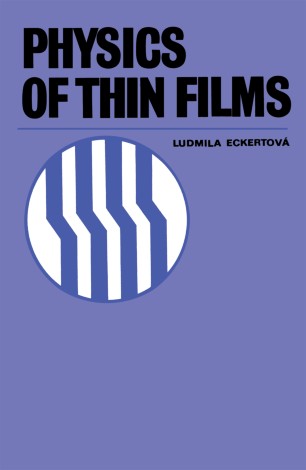 The investigation of the physical properties of matter has progressed so much during the last hundred years that today physics is divided into a large group of special branches, which are often very distant from each other. These branches arise because of the vast extent of the science itself, and are distinguished by the particular area studied, the method of investigation and so on. An independent and important branch that has developed recently is the physics of thin films. This deals with systems which have only one common property, namely, that one of their dimensions is very small, though all other physical properties of such systems may be different, as well as methods of investigating them. Usually, we investigate the physical characteristics of three-dimensional bodies. Their characteristic prop::!rties are often related to a unit volume, i.e. it is assumed that they are volume-independent. This assumption is legitimate as long as the dimensions are 'normal', i.e. more or less within macroscopic limits; but as soon as one dimension becomes so small that there is a considerable increase in a surface-to-volume ratio, that assumption is no longer valid.