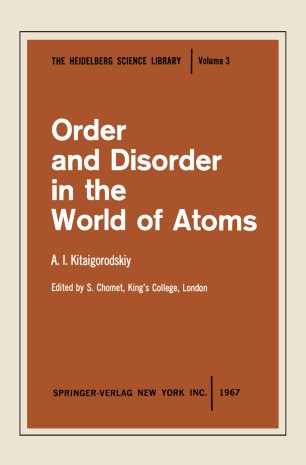 Order and Disorder in the World of Atoms

Part of the The Heidelberg Science Library book series (HSL)

Our main aim is to examine whether the atoms and molecules constituting the world around us are distributed in space in a random and disordered fashion, like pebbles on the beach, or in an ordered pattern like the cells of a honeycomb. However, it is often impossible to make such a clear-cut distinction, and it is better not to use "order" and "disorder" as absolute terms but to speak instead of a "degree of order" and a "degree of disorder. " These concepts are fairly new in science. Up to about 20-30 years ago it was still believed (and in fact this belief can still be en­ countered today) that certain states of matter - such as gases, liquids, and amorphous solids - were characterized by a totally disordered distribution of the constituent particles, whilst crys­ tals, by contrast, exhibited perfectly ordered lattices. According to the present view, on the other hand, order and disorder often coexist inseparably from each other, though there are admittedly many cases in which "order" or "disorder" does describe quite accurately tbe actual state of affairs. Symptoms of disorder have recently been found in seemingly perfectly regular molecular structures, and symptoms of order in seemingly perfectly chaotic aggregations of particles. These dis­ coveries led to the formulation of new and important laws cor­ relating the structure of substances with their properties, and to tIlt' explanation of many phenomena in terms of changes in the degree of order.