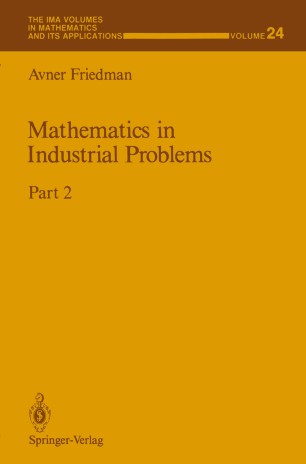 Part of the The IMA Volumes in Mathematics and Its Applications book series (IMA, volume 24)

This is the second volume in the series "Mathematics in Industrial Prob­ lems." The motivation for both volumes is to foster inter action between Industry and Mathematics at the "grass roots"; that is at the level of spe­ cific problems. These problems come from Industry: they arise from models developed by the industrial scientists in venture directed at the manufac­ ture of new or improved products. At the same time, these problems have the potential for mathematical challenge and novelty. To identify such problems, I have visited industries and had discussions with their scientists. Some of the scientists have subsequently presented their problems in the IMA seminar on Industrial Problems. The book is based on questions raised in the seminar and subsequent discussions. Each chapter is devoted to one of the talks and is self-contained. The chap­ ters usually provide references to the mathematical literat ure and a list of open problems which are of interest to the industrial scientists. For some problems partial solution is indicated brießy. The last chapter of the book contains a short description of solutions to some of the problems raised in the first volume, as weIl as references to papers in which such solutions have been published. The experience of the last two years demonstrates a growing fruitful interaction between Industry and Mathematics. This interaction benefits Industry by increasing the mathematical knowledge and ideas brought to bear upon its concern, and benefits Mathematics through the infusion of exciting new problems.