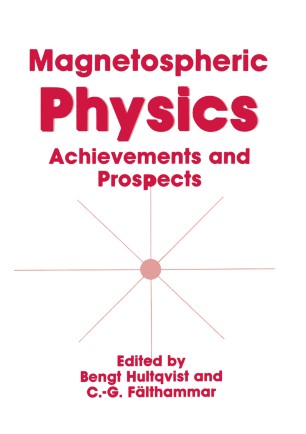 This book contains the proceedings of the 1989 Crafoord Symposium organized by the Royal Swedish Academy of Sciences. The scientific field for the Crafoord Prize of 1989 was decided in 1988 by the Academy to be Magnetospheric Physics. On September 27,1989 the Academy awarded the 1989 Crafoord Prize to Professor J. A. Van Allen, Iowa City, USA "for his pioneer work in space research, in particular for the discovery of the high energy charged particles that are trapped in the Earth's magnetic field and form the radiation belts -often called the Van Allen belts - around the Earth". The subject for the Crafoord Symposium, which was held on September 28-29 at the Royal Swedish Academy of Sciences in Stockholm, was Magnetospheric Physics, Achievements and Prospects. Some seventy of the world's leading scientists in magnetospheric physics (see list of participants) were invited to the Symposium. The program contained only invited papers. After the ?resentation of the Crafoord Prize Laureate, Prof. J . A. Van Allen, and his specially invited lecture: "Active Experiments in Magnetospheric Physics" follows in these proceedings two papers on the achievements of magnetospheric research hitherto. The main part of the proceedings (8 papers) deal with the main theme of the Symposium: How we shall carry on magnetospheric research in the future. The Symposium was organized by five members of the Academy representing the field of space physics: Lars Block (Stockholm), Rolf Bostrom (Uppsala), Kerstin Fredga (Stockholm), Carl-Gunne Fiilthammar (Stockholm) and Bengt Hultqvist (Kiruna, Chairman).