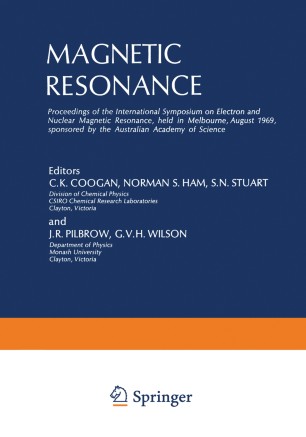 Proceedings of the International Symposium on Electron and Nuclear Magnetic Resonance, held in Melbourne, August 1969, sponsored by the Australian Academy of Science

TWENTY-FIVE years ago in Russia, Zavoisky made the first experimen­ tal observation of electron spin resonances; and a year later Purcell, Torrey and Pound at Harvard and Bloch, Hansen and Packard at Stanford ('The Harvard of the West') observed nuclear magnetic resonances for the first time. In both cases (ESR and NMR) the phenomena had been previously predicted, and Gorter - surely one of the most unlucky experimenters of our time - had made his noble attempts to detect magnetic resonances. Purcell et aZ. , having beaten their radar swords into scientific ploughshares, used a re­ 3 sonant coaxial cavity, filled the inductive part with 850 cm of paraffin, and produced a resonance with a signal-to-noise ratio of 20. They predicted that the sensitivity could be increased several hundred-fold and foresaw applications in determining magnetic mo­ ments, investigating spin-lattice coupling and measuring magnetic fields. Their letter reached the editor of Phys. Rev. on Christmas Eve 1945, and the basis of NMR in the solid state was laid. Bloch et aZ. , fortunately working independently, established the entirely different, crossed-coil approach to the observation of NMR in a water sample, which they doped with paramagnetic ions to reduce the relaxation times. They had laid the foundation of liquid-state NMR. Their letter to Phys. Rev. was received on 29 January 1946.