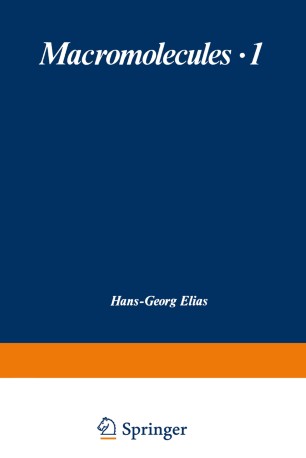 Like so many of its kind, this textbook originated from the requirements of teaching. While lecturing on macromolecular science as a required subject for chemists and materials scientists on the undergraduate, graduate, and postgraduate levels at Swiss Federal Institute of Technology at Zurich (1960-1971), I needed a one-volume textbook which treated the whole field of macromolecular science, from its chemistry and physics to its applications, in a not too elementary manner. This textbook thus intends to bridge the gap between the often oversimplified introductory books and the highly specialized texts and monographs that cover only parts of macromolecular science. This first English edition is based on the third German edition (1975), which is about 40% different from the first German edition (1971), a result of rapid progress in macromolecular science and the less rapid education of the writer. This text intends to survey the whole field of macromolecular science. Its organization results from the following considerations. The chemical structure of macromolecular compounds should be independent of the method of synthesis, at least in the ideal case. Part I is thus concerned with the chemical and physical structure of macro­ molecules. Properties depend on structure. Solution properties are thus discussed in Part II, solid state properties in Part III. There are other reasons for discussing properties before syntheses: For example, it is difficult to under­ stand equilibrium polymerization without knowledge of solution thermody­ of the glass temperature, etc.