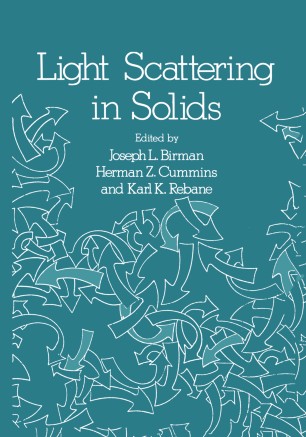 The Second USA-USSR Symposium on Light Scattering in Con­ densed Matter was held in New York City 21-25 May 1979. The present volume is the proceedings of that conference, and contains all manuscripts received prior to 1 August 1979, representing scientific contributions presented. A few manus­ cripts were not received, but for completeness the corresponding abstract is printed. No record was kept of the discussion, so that some of the flavor of the meeting is missing. This is par­ ticularly unfortunate in the case of some topics which were in a stage of rapid development and where the papers presented sti­ mulated much discussion - such as the sessions on spatial dis­ persion and resonance inelastic (Brillouin or Raman) scattering in crystals, enhanced Raman scattering from molecules on metal surfaces, and the onset of turbulence in fluids. The background and history of the US-USSR Seminar-Symposia on light scattering was given in the preface to the proceedings of the First Symposium held in Moscow May 1975, published as "Theory of Light Scattering in Condensed Matter" ed. B. Bendow, J. L. Birman, V. M. Agranovich (Plenum Press, N. Y. 1976). Strong scientific interest on both sides in continuing this series resulted in a plan for the second symposium to be held in New York in 1977. For a variety of reasons it was necessary to cancel the planned 1977 event, almost at the last minute.