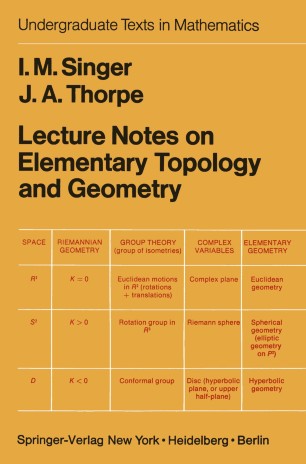 At the present time, the average undergraduate mathematics major finds mathematics heavily compartmentalized. After the calculus, he takes a course in analysis and a course in algebra. Depending upon his interests (or those of his department), he takes courses in special topics. Ifhe is exposed to topology, it is usually straightforward point set topology; if he is exposed to geom­ etry, it is usually classical differential geometry. The exciting revelations that there is some unity in mathematics, that fields overlap, that techniques of one field have applications in another, are denied the undergraduate. He must wait until he is well into graduate work to see interconnections, presumably because earlier he doesn't know enough. These notes are an attempt to break up this compartmentalization, at least in topology-geometry. What the student has learned in algebra and advanced calculus are used to prove some fairly deep results relating geometry, topol­ ogy, and group theory. (De Rham's theorem, the Gauss-Bonnet theorem for surfaces, the functorial relation of fundamental group to covering space, and surfaces of constant curvature as homogeneous spaces are the most note­ worthy examples.) In the first two chapters the bare essentials of elementary point set topology are set forth with some hint ofthe subject's application to functional analysis.