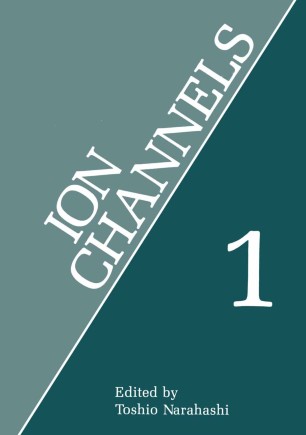 A wealth of information has been accumulated about the function of ion channels of excitable cells since the extensive and pioneering voltage clamp studies by Hodgkin, Huxley, and Katz 36 years ago. The study of ion chan­ nels has now reached a stage at which a quantum jump in progress is antici­ pated. There are many good reasons for this. Patch clamp techniques origi­ nally developed by Neher and Sakmann 12 years ago have made it possible to study the function of ion channels in a variety of cells. Membrane ionic currents can now be recorded practically from many types of cells using the whole-cell patch clamp technique. The opening and closing of individual ion channels can be analyzed using the single-channel patch clamp method. Techniques have also been developed to incorporate purified ion channels into lipid bilayers to reconstitute an "excitable membrane. " Advanced tech­ niques developed in molecular biology, genetics, and immunology, such as gene cloning and the use of monoclonal antibodies, are now being applied to the study of ion channels. A variety of drugs have now been found or are suspected to interact with ion channels to exert therapeutic effects. In addition to the classical exam­ ples, as represented by local anesthetics, many other drugs, including cal­ cium antagonists, psychoactive drugs, cardiac drugs, and anticonvulsants, shown to alter ion channel function. For certain pesticides such as have been pyrethroids and DDT, sodium channels are clearly the major target site.