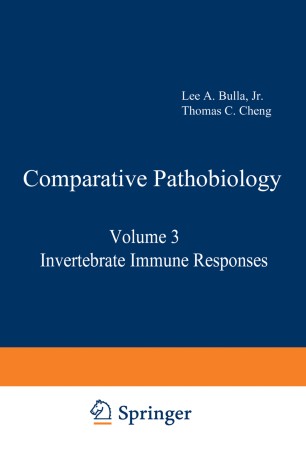 This represents the third volume of the series entitled Comparative PathobioZogy. The chapters included represent the proceedings of a symposium held at Oregon State University, Corvallis, on August 16-22, 1975. The symposium was co-sponsored by the Society for Invertebrate Pathology (SIP) and the American Society of Zoologists (ASZ). In recent years there has been an impressive increase in interest in comparative immunology, i. e. , a comparative approach to understanding how animals, both vertebrates and invertebrates, defend themselves against nonself materials. Ever since Metchnikoff's pioneering studies during the late l800s on the role of phagocytes of invertebrates, which led to his theory of cellular immunity, invertebrates have been employed with increasing fre­ quency for studying cellular defense. Consequently, it is not surprising that included in the memberships of SIP and ASZ are a large number of individuals with an active interest in this area of research. As indicated by the chapters included in this volume, the animal models employed have been primarily molluscs and insects, although crustaceans and annelids have also been popular.