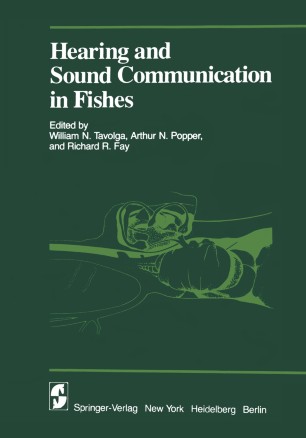 Hearing and Sound Communication in Fishes

This volume is a compilation of the papers presented at a meeting that took place in April 1980 at the Mote Marine Laboratory, Sarasota, Florida. The meeting and this volume are outgrowths of two earlier international meetings on marine bio-acoustics that occurred in 1963 and 1966 (Tavolga 1964, 1967). The first meeting took place at the Lerner Marine Laboratory of the American Museum of Natural History, while the second meeting was at the American Museum itself, and was under the sponsorship of the Department of Animal Behavior. It is apparent that these two volumes have had immense impact on the current study of marine bio-acoustics, and particularly on fish audition. In a preliminary conference in Sarasota in 1979 we decided that it was time for another such meeting, to bring together as many as possible of the investigators interested in fish acoustics in order to assess the current state of our knowledge and predict directions for research for the next several years. Such a meeting appeared par­ ticularly timely, since over the past four or five years there have been many new studies that have provided new empirical and theoretical work on basic mechanisms of fish audition. Furthermore, it became evident, as we made up preliminary lists of possible participants, that few of the currently active workers were in the field back in 1966. In fact, of the current participants, only Drs.