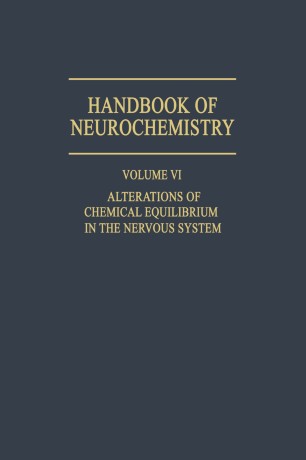 Alterations of Chemical Equilibrium in the Nervous System

It has been recognized for more than a thousand years that the function of the brain, like the function of the other organs of the body, is determined by its physical, chemical, and biological properties. Evidence that even its highest functions could be explained by these properties was gathered only in recent years, however; these findings, which clearly have to be confirmed by a great deal of further experimental evidence, indicate that most, if not all, of the functions of the brain are based on its bio­ chemical and biophysical mechanisms. This at first hearing may sound rather simple, but the ability to understand learning, emotion, perhaps even creativity, on biological terms may well be the most important scientific discovery of all time. Few pieces of knowledge can influence our future health and well-being to the degree that understanding of mental mechanisms will. It has been clearly shown in many ways in the previous volumes of this Handbook that from the biochemical or neurochemical point of view the brain is one of the most active organs. The brain seems stable and in some respects permanent; this is evidence not of inactivity but of carefully controlled homeostasis, of dynamic rather than static equilibrium, with most components undergoing metabolic alterations.