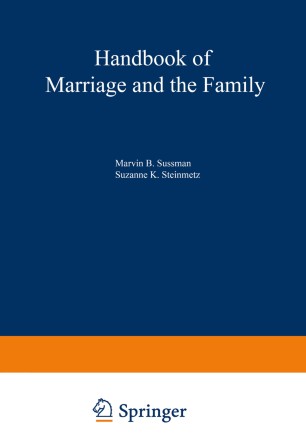 Handbook of Marriage and the Family

The lucid, straightforward Preface of this Handbook by the two editors and the comprehenSIve perspec­ tives offered in the Introduction by one ofthem leave little for a Foreword to add. It is therefore limIted to two relevant but not intrinsically related points vis-a-vis research on marriage and the family in the interval since the fIrst Handbook (Christensen, 1964) appeared, namely: the impact on this research ofthe politicization of the New RIght! and of the Feminist Enlightenment beginning in the mid-sixties, about the time of the fIrst Handbook. In the late 1930s Willard Waller noted: "Fifty years or more ago about 1890, most people had the greatest respect for the institution called the family and wished to learn nothing whatever about it. . . . Everything that concerned the life of men and women and their children was shrouded from the light. Today much of that has been changed. Gone is the concealment of the way in which life begins, gone the irrational sanctity of the home. The aura of sentiment which once protected the family from discussion clings to it no more .... We wantto learn as much about it as we can and to understand it as thoroughly as possible, for there is a rising recognition in America that vast numbers of its families are sick-from internal frustrations and from external buffeting. We are engaged in the process of reconstructing our family institutions through criticism and discussion" (1938, pp. 3-4).