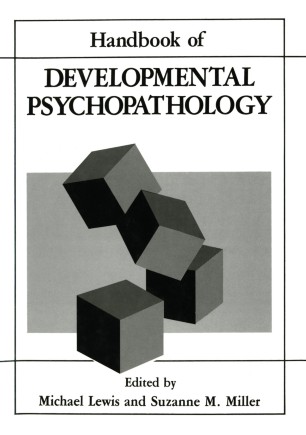 Developmental psychopathology is the new child on the block. As yet not an overly sturdy child, but one clearly out of the cradle, an active toddler and an enterprising explorer of the boundaries of its province. It wasn't always so. Only 15 years ago Thomas Achenbach in publishing the first edition of his book used a recently coined title, Developmental Psychopathology, and began the volume with a provoking first sentence: "This is a book about a field that hardly exists yet. " Seven years later when the second edition appeared, that sentence had been deleted. In place of the original 13-page chapter, on the "Developmental Approach to Psychopathology in Chil­ dren," there was a 40-page chapter focused on the biological, cognitive, social-emotional, and educational perspectives in development, together with a lengthy account of develop­ mental periods and an integrative statement on the constituents of a developmental framework. Other signs and symptoms began to appear. Child Development, a doyen for develop­ mentalists, devoted a special issue, under the guest editorship of Dante Cicchetti, to an emergent developmental psychopathology. This year saw the publication of a new journal, Development and Psychopathology (1989), edited by Cicchetti and Nurcombe. And attend­ ees at recent meetings of the Society for Research in Child Development can attest to the growing interest of the membership in the linkage of development and psychopathology as seen and heard via posters, symposia, and guest speakers.