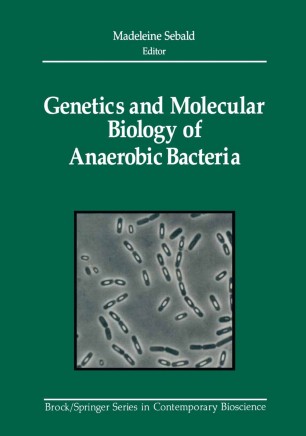 The field of bacterial genetics has been restricted for many years to Escherichia coli and a few other genera of aerobic or facultatively anaerobic bacteria such as Pseudomonas, Bacillus, and Salmonella. The prevailing view up to recent times has been that anaerobic bacteria are interesting organisms but nothing is known about their genetics. To most microbiologists, anaerobic bacteria appeared as a sort of distant domain, reserved for occasional intrusions by taxonomists and medical microbiologists. By the mid-1970s, knowledge of the genetics and molecular biology of anaerobes began to emerge, and then developed rapidly. but also im­ This was the result of advances in molecular biology techniques, portantly because of improvements in basic techniques for culturing anaerobes and for understanding their biochemistry and other areas of in­ terest. Investigations in this field were also stimulated by a renewal of interest in their ecology, their role in pathology and in biotransformations, and in the search for alternative renewable sources of energy. The initial idea for this book came from Thomas D. Brock. When Dr. Brock requested my opinion about two years ago on the feasibility of publishing a book on the genetics of anaerobic bacteria, as a part of the Brock/Springer Series in Contemporary Bioscience, I answered positively but I was apprehen­ sive about assuming the role of editor. However, I was soon reassured by the enthusiastic commitment of those I approached to contribute. Eventually, thanks to the caring cooperation of the contributors, the task became relatively easy.