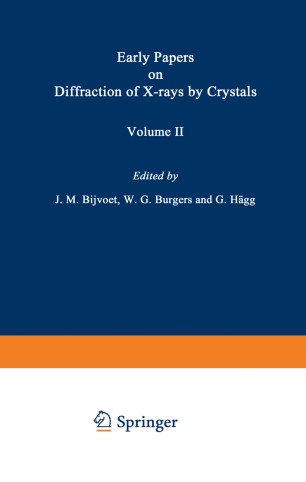 Early Papers on Diffraction of X-rays by Crystals

In the Preface to Early Papers on Diffraction of X-rays by Crystals Volume I (containing Chapters I-V and published in 1969), the history and planning of the complete book were outlined. The publication in two separate and consecutive volumes was merely a matter of management; the compilation of both volumes was done at the same time. There is a distinct difference in subject-matter between both volumes: Volume I contains the fundamentals of the theory, while Volume II treats the practical development of the 'trial' -method and the genesis and first applications of the Fourier method. In the period covered by Early Papers (1912-1935), the trial method leads to the successful conquest of structures with up to a hundred parameters. We conclude the book with Patterson's discovery (1934) of the p2-series as described in his second, more detailed and extended paper of 1935. With this method the apparatus was completed which led to the present undreamt-of successes of the Fourier method in the field of organic chemistry. We have considered the inclusion of Robertson's famous synthesis of the structure of phtalocyanine (1936). However, we decided that its proper place would be at the beginning of a book which, no doubt, will appear one day, describing this later period. Considerations of space caused us to give up the chapter on Texture planned at first.