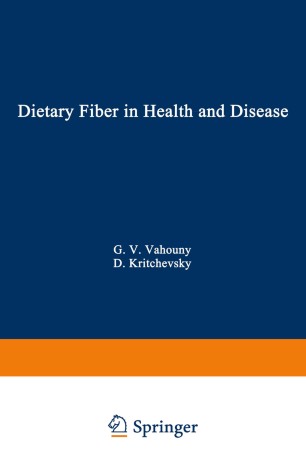 Dietary Fiber in Health and Disease

Dietary fiber is a topic that has burgeoned from an esoteric interest of a few research laboratories to a subject of international interest. This growth has been helped by the intense public interest in the potential benefits of adding fiber to the diet. The general popularity of fiber may have been helped by the perception that, for once, medicine was saying "do" instead of "don't. " There has been a proliferation of excellent scientific books on dietary fiber. Why another? The Spring Symposium on Dietary Fiber in Health and Disease was an outgrowth of our belief that informal discussion among peers-a discussion in which fact is freely interlaced with speculation-was the most effective way to organize our knowledge and direct our thinking. The normal growth progression of a discipline inc1udes its branching into many areas. Soon the expertise, which was once general, is broken into many specialties. Intercommunication becoIlles increasingly difficult. It was our intent to provide a forum that would expose its participants to developments in areas related to their research interest. Free exchange under these conditions could not help but broaden everyone's knowl­ edge and expand his horizons. We feel that this symposium was singularly successful in achieving its goals. It resulted in a free and friendly exchange of knowledge and ideas. It helped to establish seeds for future collaborations based on mutual interest and friendship. The proceedings of this conference will serve as yet another basic resource in the fiber field.