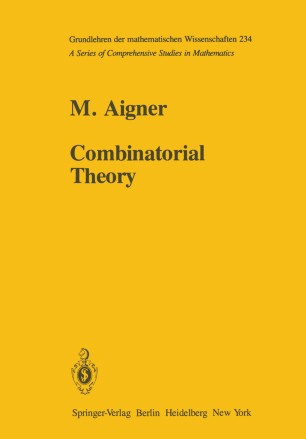 It is now generally recognized that the field of combinatorics has, over the past years, evolved into a fully-fledged branch of discrete mathematics whose potential with respect to computers and the natural sciences is only beginning to be realized. Still, two points seem to bother most authors: The apparent difficulty in defining the scope of combinatorics and the fact that combinatorics seems to consist of a vast variety of more or less unrelated methods and results. As to the scope of the field, there appears to be a growing consensus that combinatorics should be divided into three large parts: (a) Enumeration, including generating functions, inversion, and calculus of finite differences; (b) Order Theory, including finite posets and lattices, matroids, and existence results such as Hall's and Ramsey's; (c) Configurations, including designs, permutation groups, and coding theory. The present book covers most aspects of parts (a) and (b), but none of (c). The reasons for excluding (c) were twofold. First, there exist several older books on the subject, such as Ryser [1] (which I still think is the most seductive introduction to combinatorics), Hall [2], and more recent ones such as Cameron-Van Lint [1] on groups and designs, and Blake-Mullin [1] on coding theory, whereas no compre­ hensive book exists on (a) and (b).